SAN FRANCISCO and CASTRES, France, Oct. 14, 2022 /PRNewswire/ -- Atara Biotherapeutics, Inc. (Nasdaq: ATRA) and Pierre Fabre today announced the Committee for Medicinal Products for Human Use (CHMP) of the European Medicines Agency (EMA) has adopted a positive opinion recommending the European Commission (EC) approval of EbvalloTM (tabelecleucel) as a monotherapy for treatment of adult and pediatric patients two years of age and older with relapsed or refractory Epstein–Barr virus positive post–transplant lymphoproliferative disease (EBV+ PTLD), who have received at least one prior therapy. For solid organ transplant patients, prior therapy includes chemotherapy unless chemotherapy is inappropriate. 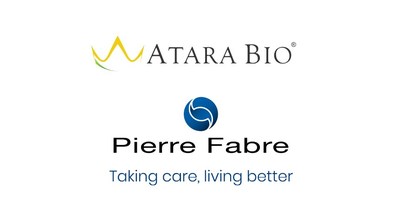 "Today's positive CHMP opinion is a major step forward for Atara's first-in-class product that addresses an ultra-rare and aggressive cancer with no approved therapies while providing further validation for our unique allogeneic EBV T-cell platform," said Pascal Touchon, President and CEO of Atara. "If approved, EbvalloTM will be the first ever allogeneic T-cell therapy and has the potential to change the treatment paradigm for patients with relapsed or refractory EBV+ PTLD who face a poor prognosis and dismal median survival of only weeks to a few months."

The CHMP positive opinion is based on results from the pivotal Phase 3 ALLELE study.[1] In this study, EbvalloTM demonstrated a favorable risk-benefit profile.

"This positive opinion is a landmark moment for patients suffering from an extremely rare cancer," said Eric Ducournau, CEO of Pierre Fabre, Atara's commercialization partner in Europe. "EbvalloTM is on track to be the first ever allogeneic T-cell therapy approved in the European Union. Our teams are excited and poised to bring this first-in-kind innovation to European patients, as a testimony to our corporate purpose: every time we care for a single person, we make the whole world better."

"All patients undergoing transplant are at risk of developing EBV+ PTLD during their life, and in that case, those that do not respond to initial treatment have few treatment options left," said Dr. Sylvain Choquet, Head of the Clinical Hematology Department at Pitié-Salpêtrière, APHP, France. "There is an urgent unmet need for effective therapies for this rare B-cell lymphoproliferative disease, with data from the pivotal study demonstrating the potential for EbvalloTM to change the treatment of relapsed or refractory EBV+ PTLD and provide a much-needed therapeutic solution to both patients and physicians."

With the CHMP positive opinion, the EC's approval of the EbvalloTM Marketing Authorization Application (MAA) under exceptional circumstances is expected by the end of 2022. If granted by the EC, the centralized marketing authorizations would be valid in all EU Member States as well as Iceland, Liechtenstein, and Norway. In addition, the MAA will be filed to the Medicines and Healthcare Products Regulatory Agency (MHRA) in the UK under the EC Decision Reliance Procedure (EC DRP) with an expected approval by the end of 2022. Under an existing collaboration agreement, Pierre Fabre will lead all commercialization and distribution activities in Europe and select other markets in addition to medical and regulatory activities after the anticipated MAA approval in Europe.

About EbvalloTM and EBV+ PTLD

EbvalloTM is an allogeneic, EBV-specific T-cell immunotherapy which targets and eliminates EBV-infected cells in an HLA-restricted manner. EbvalloTM (tabelecleucel) has been granted Breakthrough Therapy Designation for the treatment of rituximab-refractory EBV-associated lymphoproliferative disease (LPD) by the U.S. Food and Drug Administration (FDA) and has orphan drug designation in the U.S. EbvalloTM (tabelecleucel) received PRIME designation by the European Medicines Agency (EMA) for the treatment of patients with EBV-associated PTLD in the allogeneic hematopoietic stem cell transplant (HCT) setting who have failed on rituximab and has orphan drug designation in the EU. EBV+ PTLD is a rare, acute, and potentially deadly hematologic malignancy that occurs after transplantation when a patient's T-cell activity is compromised by immunosuppression. It can impact patients who have undergone solid organ transplant (SOT) or an allogeneic HCT. Poor median survival of 0.7 months and 4.1 months for HCT and SOT, respectively, is reported in EBV+ PTLD patients for whom rituximab ± chemotherapy failed, underscoring the significant need for effective, safe, and fast-acting new therapeutic options.

Established in the South-West of France since its creation, the group manufactures over 95% of its products in France and employs some 9,600 people worldwide. Pierre Fabre is 86%-owned by the Pierre Fabre Foundation, a government-recognized public-interest foundation since 1999, and secondarily by its own employees through an international employee stock ownership plan. Further information about Pierre Fabre can be found at www.pierre-fabre.com, @PierreFabre.

Atara Biotherapeutics, Inc. (@Atarabio) is a pioneer in T-cell immunotherapy leveraging its novel allogeneic EBV T-cell platform to develop transformative therapies for patients with serious diseases including solid tumors, hematologic cancers and autoimmune disease. With our lead program in Phase 3 clinical development, Atara is the most advanced allogeneic T-cell immunotherapy company and intends to rapidly deliver off-the-shelf treatments to patients with high unmet medical need. Our platform leverages the unique biology of EBV T cells and has the capability to treat a wide range of EBV-associated diseases, or other serious diseases through incorporation of engineered CARs (chimeric antigen receptors) or TCRs (T-cell receptors). Atara is applying this one platform, which does not require TCR or HLA gene editing, to create a robust pipeline including: tab-cel in Phase 3 development for Epstein-Barr virus-driven post-transplant lymphoproliferative disease (EBV+ PTLD) and other EBV-driven diseases; ATA188, a T-cell immunotherapy targeting EBV antigens as a potential treatment for multiple sclerosis; and multiple next-generation chimeric antigen receptor T-cell (CAR-T) immunotherapies for both solid tumors and hematologic malignancies. Improving patients' lives is our mission and we will never stop working to bring transformative therapies to those in need. Atara is headquartered in South San Francisco. For additional information about the company, please visit atarabio.com and follow us on Twitter and LinkedIn.